Cyclists of the world,
unite!

The long season of cycling parades opens on February 11 in Moscow, followed by Milan, London and Washington. With the involvement of thousands of cyclists. Here’s a brief guide 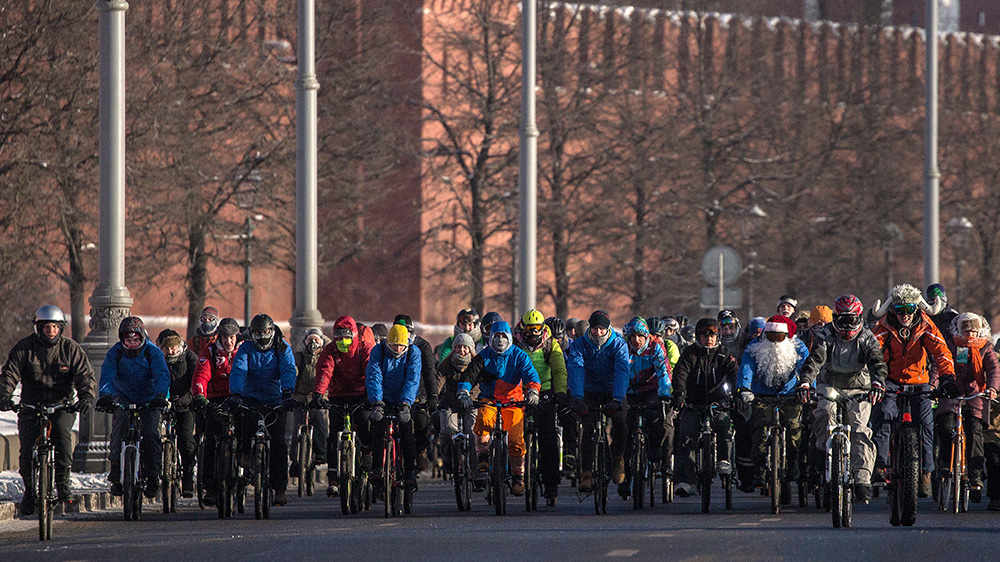 The world cycling parade season opens in Moscow. On Sunday, February 11 the streets of the Russian capital will be emptied of vehicle traffic and filled with bicycles to mark the final day of the sixth Winter Cycling Congress. The Moscow Winter Cycling Parade has become a classic event, held for the third time this year, made unique by the complications of the Russian winter: last year’s event was held in January, at a temperature of minus 28 degrees Celsius! 500 courageous participants joined in, all so well-trained and well-equipped that the emergency services the organisers had on standby never had to be called in. The first edition, held in 2016, saw the participation of 3,000 people. With four annual parades, Moscow is definitely one of the cities where cycling parades are most popular; events of this type are gaining in popularity all over the world, though most people prefer to wait until Spring!

Italians are in fact waiting for the weather to warm up before holding their first cycling parade. The SunRiseBikeRide in Milan is scheduled for June 10, organised in partnership with Cyclo-Pride. Amateur cyclists from Milan will meet at Castello Sforzesco at dawn and ride around the city. Registration costs 10 euros for adults and 2 euros for children of no more than 12, free if your birthday is on the day after the event. The registration fee includes a SunRiseBikeRide tour 2017 t-shirt, an organic snack from Alce Nero and insurance coverage. The event will be linked with a charity event for the non-profit association CBM Italia Onlus. Bike Pride, an event organised by the association Bike Pride FIAB Torino, will be held in Turin in the summer. Last year’s event, on July 2, aimed to do away with negative stereotypes about the bicycle, and demonstrate that cycling allows you to get around the city much faster and is good for your health.

The Tweed Run is an unusual event held in London in May: 750 to 1000 people pedal through the streets of the British capital elegantly dressed in tweed, perched on the saddles of beautiful vintage bicycles, stopping for a cup of tea, then a picnic and finally a cocktail at the finish line in a city park. A series of prizes will be awarded: for the best-dressed man and woman, the best vintage bicycle, the best moustache, and the best helmet. Bicycles and rollerskates appear together in Brussels’ Roller Bike Parade, an event held in a number of Belgian cities in the summer. Dates and routes remain to be defined; registration is free of charge. On May 6 New York hosts the Five Boro Bike Tour: a 40-mile tour of the Big Apple, starting in Lower Manhattan and crossing Central Park, Harlem, the Bronx, then down to Queens, Brooklyn and Staten Island, all perfectly organised down to the tiniest little detail, with refreshment points along the way. In this case the prices are a bit higher: 105 dollars for a standard package, 340 for a VIP package offering an experience that goes beyond the bike ride itself, including gadgets, access to exclusive areas and a timed crossing of Verrazzano bridge.

Washington’s Dc Bike Ride is held on May 19: 20 miles pedalling across the capital city of America, with not a single car in sight, ending in a big party. The southern hemisphere inaugurates the season of World Naked Bike Rides, first held in 2001 in Saragozza, officially recognised three years later, and now held all over the world with the involvement of thousands of totally naked cyclists who ride to protest against unsafe conditions, pollution and excessive energy consumption. Starting in March in Cape Town (10) and Melbourne (18), and coming to the northern hemisphere in June, in Chicago (9), Los Angeles (23), Las Vegas (29), and Helsinki (July 21). And many more: last year the event was held in 120 different cities, and London’s 2010 ride attracted 1,500 participants.