From Trussardi, Armani and Chanel’s bike-based projects to Paul Smith’s passion for the Tour de France: the history of the bond between two-wheelers and the catwalk 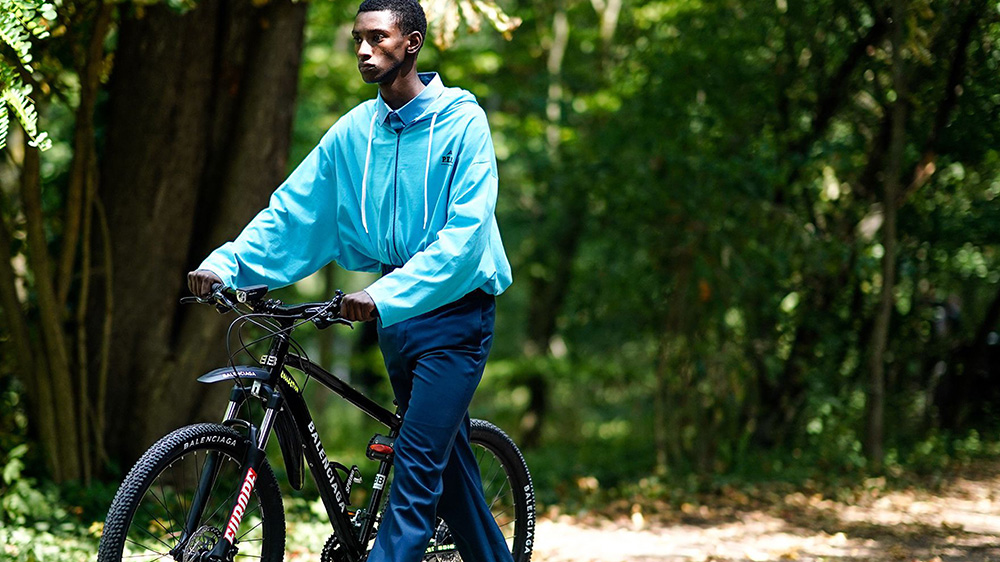 In the beginning were the cyclists, a perfect pair of shorts for hopping on your very own bike and pedalling comfortably, carried off in everyday casual wear. But the history of two-wheelers’ impact on fashion goes way back, and continues to this day, with a resurgence somewhere between 2015 and 2016 signed by the big names of fashion and legitimised by important newspapers such as The Washington Post and The Wall Street Journal. At Pitti Uomo 2015, Moschino proposed a collection which was inspired entirely by the two-wheeled world. From its shirts to its accessories - sunglasses and hats - everything called up hybrid images of a professional bike racer with a motorcycle racer. It was a tendency brands like Topman Design and Dsquared2 would follow.

The bond between cycling and fashion proved infectious for brands like Chanel too. With the 2008 spring-summer collection, Chanel chose to honour the “sporty” heritage of its founder by designing a black bike with silver accents, decorated with the French fashion house’s trademark and premium leather inserts. It was a retro gem for going around the city without giving up an ounce of elegance. That is, provided one was willing to spend 8,900 euro for one. Armani was one step ahead of Chanel, as it was in 2005 that Armani came on the scene and collaborated with Bianchi, together able to generate Sportbike Emporio Armani: black, with an aluminium racing frame and straight handlebars, along with accessories carrying the brand of the Milan fashion house. Once again with Bianchi, but at the end of 2011, Gucci also went to work, producing two different bike models. The first was black with classic gears; the second was a white, single-speed bike; both were for sale at 14 thousand euro.

The Trussardi City bike, 1911, dates from 2010, and was presented 30 years after the first bike produced by the fashion house, a black frame with gold finish women’s city bike and military-style accessories for a value of 2,500 dollars. There have been analogous operations for Fendi (Amante Donna, a 2009 cruiser for 10 thousand euro in the full-optional version with leather panniers and an elegant front case), Louis Vuitton (who in 2011 presented a fixed-gear bike for bike polo enthusiasts) and Ralph Lauren (who made Rugby Bike Run Tweed together with Pashley Cycles, it is a vintage bike with a midnight blue frame and cream tires, of which they produced only 50 specimens).

The cases of designers being deeply influenced by cycling are not few indeed. The most striking is that of Paul Smith. As a boy he dreamed of racing like a professional but had to give up his dream due to a bad accident. When he found he was among the most appreciated designers in the world, he decided to reclaim his passion by designing the first Maglia Rosa for the Giro d’Italia 2013, and then by dedicating his Paul Smith 531 line, inspired by amateur cycling, to the Tour de France. The line takes its name from the steel alloy in Reynolds bikes used at the Grand Boucle. The line is made up of a clothing mix using technical fabrics, jackets and Merino wool sweaters, none of which ever lose touch with their creator’s style. The very same Smith, in 2016, published Paul Smith’s Cycling Scrapbook, a book which gathers together the most important shirts in cycling history and tells the story of how some have influenced his way of understanding fashion.

Demna Gvasalia, director of Balenciaga, was also struck by the two-wheel spell. Beyond a series of accessories, such as chain-shaped bracelets, in 2017 he launched a 3,500-euro mountain bike. Street Style brands have gotten in on the trend. For two years Levi’s has their Commuters line of jeans, designed specifically to allow for agile movement between saddle and pedals. H&M came to the cycling public with its leggings that have elasticised, reflective inserts. And, in 2011, Diesel launched “Only the Brave”, a single-speed, 850-euro racing bike made with Pinarello.