Home Life Virtual cycling: leave the group behind in the comfort of your own home

Virtual cycling: leave the group behind in the comfort of your own home

Workouts, spinning and races. Ride the roads of the world from your room, with the technological revolution of cycling 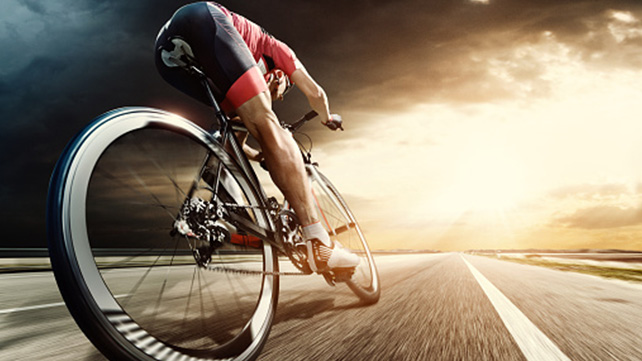 Once there were only games, and suggestions from gamers looking for new technologies to test their skills. Today virtual reality has entered the world of sport, not only amateur but also professional, becoming part of the training routines of many American football, ice hockey, baseball and basketball teams.

Not even cycling has resisted the technological wave revolutionising sport, with applications that simulate racing conditions down to the smallest detail, without even having to wheel your bike out the front door. Just mount it on a smart turbo trainer, such as those produced by Wahoo and Tacx, download the Zwift software to your iOS computer or mobile device, and get pedalling.
The simulation is highly accurate. Each time the road climbs on the screen, it becomes tougher to pedal, and the energy exerted on the pedals returns to the software and regulates the pace of the simulator. This is a new and alternative way to enjoy a passion that in recent years has come back into fashion, also thanks to the gradual spread of bike sharing. In Italy, bicycle sales soared in 2015 with the boom of e-bikes and according to a survey by Legambiente, the number of cyclists has tripled in the decade from 2001 to 2011, from 2.9% to 9% of the population (equal to around 5 million people), while Europe is led by the Netherlands (36%), Denmark (23%) and Sweden (17%). But the sector is also on the rise in the UK, where according to the National Cyclists’ Union, around 2 million people pedal at least once a week, in the US, which has constantly recorded over 66 million cyclists (20% of the population) since 2013, and in Brazil, where the number of bikes is clearly growing (just think of San Paolo, which from 2014 to 2015 increased by 66%).

These new technological prospects can further boost the sector, joining in the growth trend of workout apps. Software such as Runtastic and Nike+, capable of replacing personal trainers or mapping the kilometres covered using GPS, recording speed and sharing data on social profiles, is now well established. Zwift attempted to do the same, with the addition of virtual reality and real-time competition.
You can train to lose weight or follow several week programs prepared by sports professionals such as national time-trial champion Marco Pinotti, former cyclist and triathlete Chris Carmichael, not to mention the former coach of Lance Armstrong. But Zwift really stands out for its social features, which make it possible to meet other users and challenge them on virtual racetracks, competing on challenging climbs and descents at any moment, even if there is not enough time to go out for a run. The official number of registered accounts is unknown, but Zwift promises virtual interaction with users from 150 different countries, and there is a “Zwift Riders” group on Facebook with 30 thousand members. You can pedal through tropical paradises on the imaginary island of Watopia, along the busy streets of London or take on the 2015 Richmond World Championship route, the first of the two consecutive titles won by Peter Sagan. And you may even end up in a group with professional cyclists such as Jens Voigt, Laurens ten Dam, Ted King, Evelyn Stevens, Lawson Craddoc, André Greipel, Matt Hayman and Nathan Guerra. All data can be shared with a simple click on Strava, the app that lets you record your training results and share them with a community of runners and cyclists from around the world, and each spin is recorded on your computer and can be uploaded to any sharing sites or apps. The service also includes a $10 per month subscription, with a 7-day free trial and will soon be available with an equally immersive virtual running experience.

Before Zwift, Italian software Widerun took the world of virtual sport by storm back in 2014. Widerun resembles Zwift, uniting training with online gaming, and works much in the same way: with a bike attached to a trainer and software visible on a computer or 3D viewer such as Oculus Rift or Samsung Gear VR connected to the roller via Bluetooth. The software developed thanks to Kickstarter crowdfunding lets you choose from 11 different scenes: from the slopes of San Francisco to the Great Wall of China, or even the locations of fantasy videogame Skyrim or the Barrier of popular TV series ‘Game of Thrones’. The experience is so immersive that in the most recent version you can turn the handlebars of your bike and leave the main trail to discover alternative routes or adventure off-track.
For those who love technology but do not want to give up the wind, rain or sun beating down, there is another option: augmented reality. You can take your bike out on the road and wear a special helmet, like those designed by British company DCA Design. A system of cameras and ultrasound sensors give 360 vision, increasing the safety of cyclists by warning them of approaching cars and other dangers, even behind them, and on the same viewer displays GPS maps and a number of parameters such as speed, heart rate and distance, for those who want to monitor their performance. For now it is still a concept, but in 2016 it received a Red Dot Award, and promises to change the lives and road safety of cyclists forever.