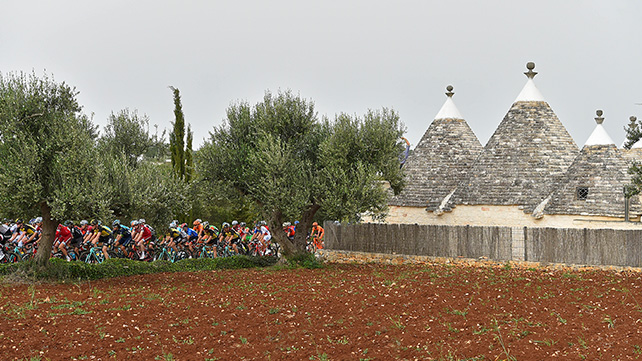 The Giro d’Italia is an ongoing, obvious, practical demonstration of the saying for which necessity is the mother of invention. The Giro, as we know, was invented by Gazzetta dello Sport at the beginning of the 1900, aiming essentially at one single goal: increasing the number of sold copies. It was born to be hardly more than an expedient, but then it turned into the sport and social epic of an entire Country. The same thing may be said for Valle d’Itra’s Trulli.

In the Middle Ages the counts of Conversano entrusted to many peasants the scrublands where today there is the city of Alberobello, giving the beneficiaries also the chance to build up houses using the local stone. There was just one condition: the shelters needed to be built without using mortar, exclusively through dry stonework, so as to be easily demolished in case of an inspection of the Kingdom of Naples’ Spanish viceroy, who issued an edit for which every new urban settlement was supposed to pay a tribute. The Trulli and their unique speaker-shaped domes were the solution. These huts started inhabiting the Murge’s far east area, stippling of white cones the red ground of this part of Puglia, full of caves and canyons. The 6th of December 1996 the Trulli were recognized as World Heritage of Humanity by UNESCO; the 12th of May 2017 they hosted for the first time the finish line of a Giro d’Italia’s stage.

The last 70 kilometers of the 100° Giro d’Italia’s seventh part were for the group so pleasant that the Quick-Step runners at some point asked their sporting directors to go with the music through their headsets. Laurens Ten Dam, from Sunweb, said that he had a great time and that he chatted with his best friends during the race. Bob Jungels, the pink jersey, talked about a perfect day, where the only thing he missed was a coffee-break. All in all, the Castrovillari-Alberobello was one of those stages for which Giro’s cyclists wait like children for Christmas morning; a break without too much stress in the middle of three crazy weeks, a chance to take a look around for once, until almost the final sprint, to enjoy Valle d’Itra’s countryside and its Trulli, the stone cones built for necessity and turned into a monument.

Because, the thing is, the ideas born without apparent desires, yet just by needs, often contain a huge potential; the potential which can be realized by the imagination when you have to get away with problems, find the squaring of the circle, try to express the inexpressible. It is the same principle which makes the art move, after all. In this respect, Caleb Ewan, from Sydney (Australia), may be actually considered a great artist. Ewan is 167 centimeters high and he would have a climber’s body, but he says he feels to be born to be a sprinter. And in order to become a true sprinter he had to come up with a brand new technique, since sprinters are big boys, and he has short legs and arms. Thus, what little Ewan does during the sprint is this: he puts his breastbone on the handlebars, and moves the head downwards, nearly touching the front wheel and creating a position which is, all at once, scary, extremely aerodynamic and, as far as he says, comfortable. He has fine-tuned it in the last year and a half, he has offset his biological lacks with dynamic. Through his talent, he has satisfied the need of being competitive with the fastest sprinters in the world; he also managed to beat them, as he did after the very last Alberobello’s turn, where the Mounts’ roads bring you to the historical districts, with cafés inside the Trulli and small shops selling zufoli – Italian folk flutes – and spinning tops. A one-of-a-kind sprinter in a one-of-a-kind postcard.