From the fields to the road, story of a rising star 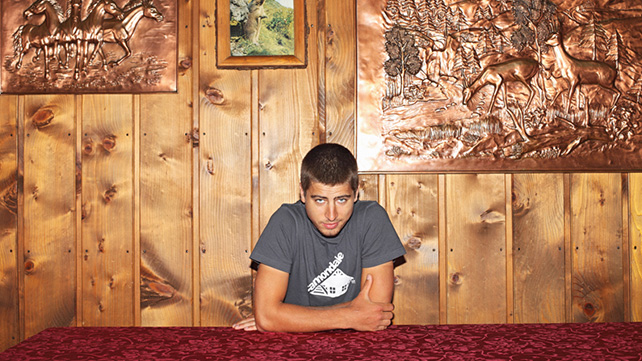 What have I done to change cycling? I have not done anything but be myself.” Peter Sagan is a natural game changer. Probably unintentionally, he is reversing the traditional paradigms of an ancient sport, which by nature, is essentially true to itself. In fact, throughout the history of cycling, cyclists have rarely crossed the path of other disciplines, and when it has happened, it has always been in the same manner: at some point in their career, road cyclists choose to become track racers or off-road riders. And once they make that choice, they never go back. Thus, each cyclist corresponds to their specific calling. This is still the case for nearly all cyclists today, as every cyclist focuses on a very definite specialty within the discipline: be it as climbers, long distance cyclists, sprinters or time trialists. And then there’s Peter Sagan, who just changes everything. Silently taking what we know of cycling and revolutionizing it. Because he started with off-road biking and made his way to road racing, but did not make it his final choice. He wants to be a real all-rounder, to be complete. Which makes him very different. Since he was a boy, he has always made own way, knowing that sometimes he would have to give way and sometimes even slow down, however it was impossible for him to stop. It is a pure talent that, as Giovanni Lombardi – Olympic champion in Barcelona and acting attorney for the Slovakian runner – says, “does not show his character. Peter is not built to design: he is just like this.”

With him, cycling – as a sport rich in history, traditions and contradictions – has lived through a revolution in its practice. And this was understood right from the beginning, when this live wire on two wheels was presented to the world. His entry was thunderous. The way he rides, wins and above all, celebrates, leaves no one untouched, be they his audience of enthusiasts or even his opponents, starting with the legend of the cycling world, Fabian Cancellara, who as a good Swiss man, square and proud, was determined not to lose or be led by the nose by that impertinent boy. When Peter wins, at the finish line he indulges in wheelies or mimicry that recall the antics of comic heroes or movie characters. “But I never mean to be disrespectful to anyone – he explains – I have always thought only about winning as having fun and enjoying it. So if, after the finish, I rear up or pretend to be the Incredible Hulk, or even mimic Forrest Gump running, it’s just for fun, not to ridicule my opponents. Do you really think it is possible that when someone wins they can limit themselves to raising their arms to the sky? It would be like limiting myself to giving my wife a kiss on the cheek.” Peter is a child of the 90’s, like the soccer players Mario Balotelli and Aaron Ramsey, and the actress Emma Watson. He shares many of the habits of all 26 year olds: he likes to joke, tease his successors and make fun of himself. But when he is riding, he is as serious as it gets. Over the years, Peter Pan Sagan has become the best testimonial for what is definitely one of the most strenuous sports, but also a sport that has become overly serious and staid. “I cannot stand being holed up in a hotel room waiting to race. I get bored as hell and after a while, I have to find something to do. For this reason, I also carry my radio-controlled cars: to occupy my free time.” Elf, acrobat and juggler, or as he says, a little bit like Forrest Gump, but also like the Incredible Hulk: Peter Pan Sagan has always been a character.

Now that he wins time after time, with a face that resembles Johnny Depp and wearing the rainbow jersey of world champion (in mid-September he also won the first edition of the European Championship), as a grown-up he has become a giant. He is the man of the bike, the purest talent to be sought out and recognized by the world of cycling. He is from Slovakia, but in reality, is a citizen of the world: everyone wants him and everyone loves him for his unconventional manner. It seems as if he was born to ride a bike, even if it is not actually his real love. “I have always loved bikes”, explains the Slovak – who for years lived in Cimadolmo in the province of Treviso, and speaks fluent Italian– “and my passion for this sport grew as I watched Valentino Rossi. For me, he is the archetype of the sportsman, the man who always has something extra to give and does everything to put himself and his generosity out there. I liked to see him win, but I loved it even more to stay and watch what he would do to celebrate yet another victory.”
This boy on the street has come a long way since he began to pedal through fields, starting with cyclocross, and then being wooed over by the charm of the mountain bike. He started riding when he was four, copying his brother Juraj, and embarked on racing at nine, when Juraj’s coach asked him to try it too. And how did the first races go? He won almost all of them, “But after three or four years old I wanted to stop so that I could dedicate myself to freeride or downhill as they seemed to be a lot more fun, and it is obvious that I just love the thrill factor. I think that everyone has figured that out by now. But I also love to surprise, to upturn set notions. And for this reason, at the last Tour de France, when everyone least expected it, I went in for the attack. I left from a long way behind to make sure I could escape: I have fun. Tactics are necessary, but not always.” As we said earlier, he is a natural game changer. Both in his technical interpretation of the sport and in the way he lives it. He is able to do things that no one else has ever done before: at the Tour de France he even managed to barter the fifth consecutive green jersey with Oleg Tinkov, the one with the points, for the Rio Olympics: “If I arrive in Paris in the green jersey – Sagan told him – I will go to Rio to ride in the mountain bike race trials.” The Russian tycoon did not know how to say no. Or rather, he tried but without great results, and so he stepped up to the challenge: “On one condition – Tinkov ordered him – you can race until the end of the season to collect points, because this year my Tinkoff leaves cycling and I want him to leave as number one in the world.” And while Peter went to Rio, he was blocked by two punctures when he was already well on his way towards the podium.

Sagan studied computer science at the Institute of Technical Administration, after having attended an acting course at the age of 11. “It was a short experience, but had it lasted a little longer, perhaps today I would be living in Hollywood. But I’m happy anyway. Whenever I feel like it, I can dedicate myself to acting. This year I had fun making a video – which immediately went viral online – playing out ‘Grease’ with my wife, Katarina. I really enjoyed playing the role of Danny Zuko, aka John Travolta, and singing ‘You’re the One That I Want’. It was a way as any to wish all my fans a happy 2016.”
Peter has fun, with the lightness of true champions. “But I have to thank my family for making me who I am (Peter is the fourth of four children born to his mom Helena, and dad Lubomir), and in particular, my brother Juraj because for reasons of age and [our involvement] in cycling, I grew up with him, sharing all the most important moments of my life, and sporting endeavours.”
Today Peter is a point of reference for many children in Slovakia and around the world, who all enjoy playing Sagan. On Ziar nad Hronom, he is not a novelty: in fact, with the “Peter Sagan Tour” in mind, many young people are inspired by the talented champion of Europe and the World. Every year these youths meet in a happening dedicated to off-road biking, which is now called the “Peter Sagan Tour”, and is staged in a little-known town in the Carpathian Mountains, by Peter’s first coach, Peter Zanicky, who is both the event organizer and master of ceremonies. “It was at a small race like this one that I met Peter for the first time in his hometown, in Zilina. Only a few months later, with his older brother Juraj, he took part in the CyS Zilina. I knew immediately that he was a true talent. His eyes shine with intelligence, his legs
give off energy.”

Tenacious, shrewd and intelligent as few are. Respectful and polite. Even today, at only 26, with more than eighty career victories and the world championship jersey to call his own, he has not changed one iota: he is always the same Peter, respectful and polite. But woe to those who ask him silly questions. To a colleague
who asked him where he was born and what his parents’ names are, he dryly responded: “That’s why there is Wikipedia, next question.” He is so unpredictable and unsettling. Above all, he is never banal. “Everyone asks me why I am so different from the others. Ask yourself rather why the others are all the same.”

Bio
Born in 1990, Peter Sagan is a professional Slovak road bicycle racer. A noted sprinter and Classics specialist, he is considered one of cycling's greatest talents and has achieved several major wins. In 2015, he married Katarína Smolková. His older brother, Juraj Sagan, is also a professional cyclist.

Achievements
2015 saw Peter Sagan become the first Slovak road cyclist to win the UCI Road World Championships by crossing the finishing line alone in Richmond, Virginia. In October 2016, he retained his World Championships road race title in Qatar. He therefore became the first rider to wear the rainbow jersey for two years in a row after Gianni Bugno (1991-1992) and Paolo Bettini (2006-2007).

The subtle art
of drawing borders

The future of cinema,
according to Steven Spielberg