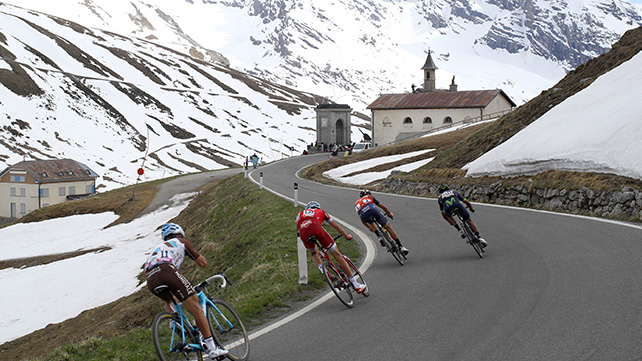 On Tuesday morning people should go to work, study or enjoy the Spring; instead, the road from Edolo to the surrounding woods was teeming with bicycles. Of course, bicycles are a great recreational means, if not the supreme toy, as someone once said. However, riding the itinerary from Edolo up to the woods is not as playful. The state road turns to a narrow path, thus making small curves and short straight stretches over and over again, slope being the only constant and ascent the only meaning. This is when bicycles become a torture, which makes it even harder to understand why so many people poured into the road leaving Edolo.

This is why the last kilometres up to the top became sort of a Cycling Maracanã Stadium. From the natural grandstands, spectators could see the Spanish rider and Scarponi's former team-mate, Luis León Sánchez, pass by first, followed by the group of champions and the rest of the peloton. Groups were very close to each other, for the race would become harsher later on. The spectators went back to their barbecue lunch while radio and TV continued to broadcast the Giro.

After Bormio, the race went on climbing the Stelvio, the highest asphalted road in Italy, riding through rugged slopes and built-up snow on the side of the road. The scenes were the same as above, though more evocative thanks to the civil engineering masterpiece of 48 hairpin turns leading to the top. The hairpin bends stuck to the rocks just like the last riders stuck to their bicycles, as if keeping them closer - almost whispering a pray for pity in their ear - could tame them. It was all useless. The brutal Stelvio overwhelmed the riders’ faces, causing them to look older and become wrinkled. If the Stelvio didn’t make it the first time, it tried for a second time. As a matter of fact, stage 16 of the Giro proposed it again after crossing the Swiss border. Here it’s called Umbrail Pass, but the mountain is the same and it overwhelmed the riders’ faces and stomachs: indeed, maglia rosa Tom Dumoulin had to stop at the side of the road for an undelayable comfort break. When he went back to the race, Dumoulin had already lost one minute but finished only two minutes down as he was able to regain some strength.

Nibali, instead, needed nothing of this. In his usual style, he tried to attack while climbing and took the lead while descending. As he rode downhill, he left everyone else behind, even Quintana. He then soloed with Landa, beating him in a two-up sprint in Bormio. Nibali reopened the Giro on its queen stage - featuring the Mortirolo and Stelvio passes -, and sent the spectators into raptures, which somehow explains why so many people had poured into the roads of the Corsa Rosa since the morning.