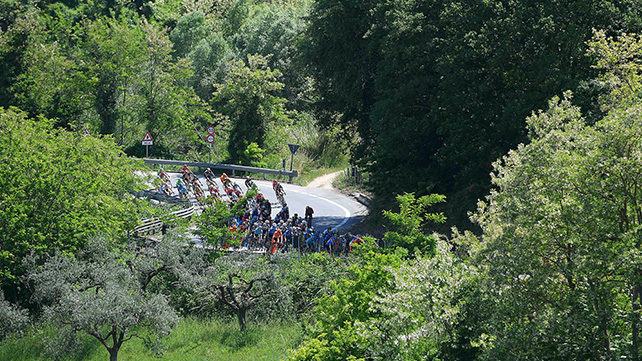 The hot season on the Adriatic coast has begun as reflected by the cyclists’ tan. Stage 9 of Giro d’Italia is looking for a cooler place, thus proposing the only viable solution it has known for the past 108 years: moving to the mountains. So, the group left the region of Molise to experience that of Abruzzo in sort of a hectic and noisy transhumance: while approaching the mountains, anxiety and tension mount high. And the bicycles are eager to ride: as the Mount Etna stage was uneventful, the Blockhaus – on the Roccamorice side – is expected to decide the winner. All participants in the ranking are still contending for victory.

Some refer to it as the hardest climb in the Giro: a 13-km climb – the first 10 of which above a 9% slope – with very few hairpin turns and scarce vegetation, which corresponds to a nearly total sunlight exposure. Not the ideal place to cool off since the Blockhaus could turn into an asphyxiating finish. What’s more, this is an unpredictable climb: in 1967, it made Eddy Merckx famous, but five years on it caused The Cannibal to undergo one of his rare career crises following the achievement of Fuente (from Spain). The term Blockhaus means “stone house” and was used to name the outposts built by the Italian army to oppose banditry under Habsburg domination: bloccaus, as referred to in documents dating back to that time. The Blockhaus belongs to the massif of Majella. It is one of the first climbs in the history of Giro d’Italia (Chieti-Naples stage, 18 May 1909) and it features rounded tops carved out by ancient glaciers. The Blockhaus hosts hermitages carved into its compact rock, among which Peter of Morrone’s favourite retreat before becoming Pope Celestine V. But above all, the Blockhaus is a legend.

Nymph Maja unsuccessfully tried to heal giant Hermes, who had been wounded in battle. His death upset Maja, who laid his body on the Corno Grande peak of the Gran Sasso massif and let herself die slowly of a broken heart on top of Majella, the mountain facing the Gran Sasso. Her legend spread among local shepherds, who started to identify it with abundance of grassland and soil fertility. This is why many inhabitants of Abruzzo still look at mountains and woods as sacred places, and the silence dominating the valleys of Majella is filled with tales and legends. Indro Montanelli, correspondent on Giro d’Italia in 1948, wrote: “In the inaccessible Abruzzo civilization, tales are not exclusively for children, like everywhere else, but they are also the expression of how adults feel about things and represent them.”

Today Majella is not as wild but is still full of mystery. If approached from the sea, Majella seems the right place to safeguard a pirate's treasure, each single kilometre being perfect for an ambush. As a matter of fact, as soon as the Blockhaus race started, Wilko Kelderman collided with a police motorcycle that was inexplicably parked at the side of the road, thus investing Adam Yates and half of Team Sky. The two captains, Landa and Thomas – among the favourites to win the maglia rosa – fell heavily losing significant amounts of time despite remounting and riding on. The rest of the ascent was a show by Nairo Quintana, the Colombian specialist climber named as “El Condor”, who soloed among the shrubs and the rocks engraved by the shepherds – some featuring crosses and figures, other ones presenting messages of poverty and desperation. Quintana’s rivals were not totally desperate on the finishing line, although not everyone was doing perfectly fine. Dumoulin and Pinot did an excellent job, Nibali survived. For the rest of them, Giro d’Italia will be a harder target to achieve after the Blockhaus stage, thus requiring great efforts in terms of leg resistance and imagination. A better tale than that of “El Condor” is now called for. Not an easy task.