Home Race Bikes are made for the mountain

Bikes are made for the mountain 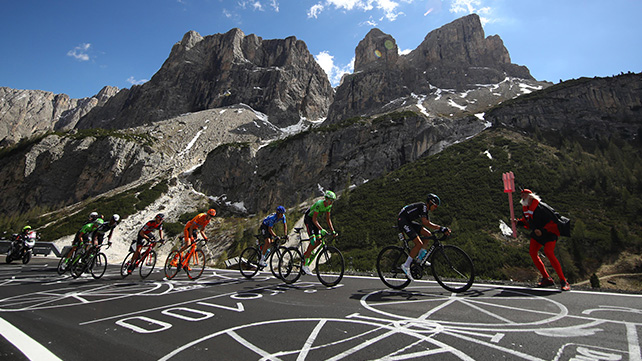 To go fast on hills, you need a steady heart and thick skin. You must pull back the worries and show the claws, learn to feel good, but also to get some respect in the pack. To go fast on hills, sometimes you need to act like the Ladino bears, which thousands of years ago pushed themselves more and more upwards, they inhabited San Cassiano’s caves and became the Dolomites’ lords; then the ice-age came and they stayed there, nobody knows why, and they were extinguished. Hills turn faces into rags and legs into jam. The mind goes blank more than the muscles: where fields of thoughts and orchards of feelings bloomed, the hill leaves nothing but a dry stone heap of exertion and curses.

The Giro’s 18th stage heads where cycling meets the Dolomites’ marvel, and you just cannot tell what inflames what, if are the bikes what adds color and movement to the pale mounts postcards, or instead the sharp peaks of the most beautiful mountains in the world are what gives the Giro d’Italia the best landscape you can imagine. The Dolomites seem to be made for welcoming cyclists: they offer to the eye of who struggles a handhold of beauty and majesty. On the other hand, bikes seem to be made for the mountain: they can climb up until where the road allows you, and even beyond; they can cross the green woods and venture into the rocks which are too rough to be colonized by life and remain naked, reflecting the sunlight like a mirror. The stage is bright and short, it starts around lunch time: it’s just 130 kilometers long, but with 5 hills. The first one is the Pordoi, and the Pordoi is the center of the Dolomites, as well as of the cycling.

The Giro faced it for the very first time in 1940, when Bartali and Coppi raced in the same team. On the Pordoi it was snowy, that day, and it wasn’t a good day for young Coppi; so Bartali, to spur him, rubbed some snow on his neck, then he guided him through the Dolomites. He won at Ortisei, yet the Giro would be Coppi’s. Seventy-seven years later, the Pordoi is the same giant as ever, with bends and creeks, paths and chasms; it doesn’t make the difference anymore, it’s an appetizer rather than a main course, but somebody still fears it.

Who fears it are the supporters: they get there by bike and go on by foot, they take off the T-shirts and lay on the grass. It is feared also by the ones at the bottom of the rank, who get detached early, throw their full water bottles away to relieve a little bit the strain, then they help each other out hoping to arrive within the timeout. The assistants fear it, too, they fear that the captain’s order comes: “Ahead! Let’s pull”, and then the assistants unbutton the uniforms and breathe through the mouth. They put the soul to rest: the Pordoi is just the beginning. On the 100 Giro’s Pordoi is Diego Rosa’s turn, and Rosa stays focused: he keeps on pulling, and today captain Landa feels good. Then the Pordoi ends, and the Valparola starts, and Rosa is always pulling in the first line; he is pulling ahead also when the Valparola ends and the Gardena starts, and even when the Gardena ends and the Pinei begins. In the middle of the Pinei Rosa gets detached, he cannot make it anymore. He leaves Landa ahead hoping to see him again during the night, directly at the hotel; this’d mean that the captain won the race and passed a lot of time with TVs and newspapers, and all his assistance up and down to the Fassa Valley made sense. However, Landa loses, he is overtaken by Van Garderen in the very last turn. Cycling is made of hours and hours of exertion lost in the mountain’s thin air.

Cycling is also made of evaluations and tactics, and, because of that, the strong ones of the rank in the end control themselves, observe Ortisei’s painted houses, fight and eventually put off the showdown to the last two uphill stages, because to go fast on hills you need a steady heart and thick skin, but, above all, very strong legs, and you can’t just feel them every day.