From Disneyland to the Maserati factory at Modena: an evocative bike ride accompanied by the P Zero Velo

A journey as magical as the Paris-Modena cycle ride simply had to start from a wonderful place like Disneyland Paris. The centre of entertainment at Marne-la-Vallée, 32km east of Paris, formed from two Disney theme parks, Disneyland Park and Walt Disney Studios Park, was the departure point for the 35 participants in the bike ride on 2 June.

The journey continued through the shadow of the spires of Reims at the end of the first leg, before reaching Champagne during the second; gothic churches and rows and rows of spectacular vines, the perfect setting for the cycle group before the airplane transfer to San Vigilio di Marebbe, the first stop off point on Italian soil.

From the Dolomites to Bellagio - from the mountains to one of the most beautiful lakes in Italy and the world. It's a short step, or rather a fast pedal! Ups and downs to be dealt with at your own rhythm, remembering that the only challenge of the Paris-Modena is with yourself.

Leaving the lake and its splendours, which fill the eyes and hearts of all the cyclists sweating and pedalling away, we arrive at the final stages, with Milan welcoming the cyclists in the headquarters of Pirelli, the nerve centre of the Italian company and birthplace of P Zero Velo tyres, fitted to a selection of the rally's bicycles in the white edition, and also home to the the famous "tailor made" P Zero tyres, which  have helped to build Pirelli's partnership with the Maserati trident over the years. This partnership between the company from Bicocca and Maserati from Modena, the city which was the last stop off point of the bike ride, is reinforced year after year because, as Juan Manuel Fangio, who won an impressive number of Gran Prix with his Maserati 250F fitted with Pirelli tyres, said in 1957, "The automobile isn't just any lump of iron, but a living creature with a beating heart, which you can enjoy and which will feel good or feel bad depending on how you treat it. If you want it to give you everything you ask of it on the road, you have to know every part of it and help set its personality free.” 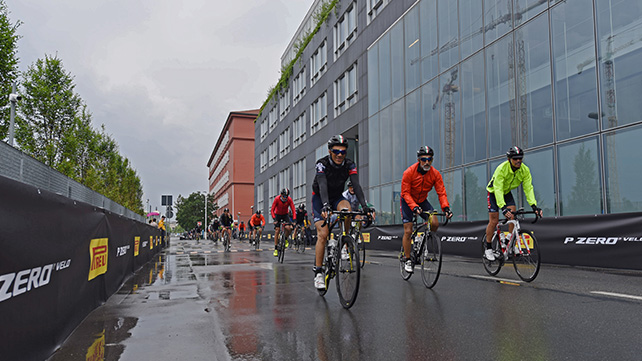