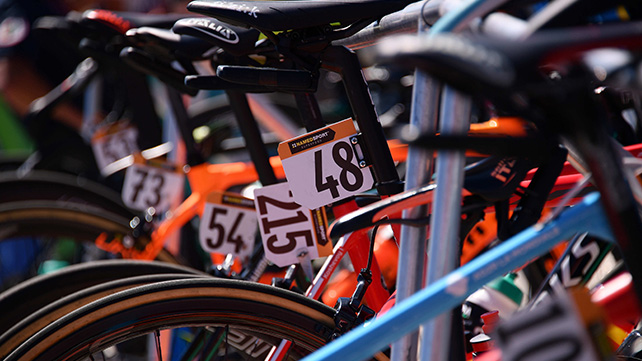 Preparing for the Giro d'Italia takes long months of planning, hard training and a strict diet. You have to analyse the route, know when to go all out and when to save your energy, experience the roads, and, of course, study your rivals' performance. For an athlete, there are many choices, big and small, to be taken during the days leading up to the Giro d'Italia: some decisions will have an immediate effect, others might only present themselves during the last climb in the very last stage of the race.

While for an athlete the months prior to the Giro d'Italia are full of frenetic activity and crucial preparation, the same could also be said for the homeowners and shopkeepers along any of the roads involved in the Giro. For dozens of municipalities in Italy the fact that the Giro is coming to their town or village is seen as the event of the decade. Its importance outstrips that of any patron saint feast day. It is seen as a well deserved chance to reach the wider public and promote the place. Indeed, the Giro d'Italia offers local tourist officials the opportunity to talk about their town or village from the podium, the tables outside the bars in the piazzas can be seen on TV around the world and even the balconies overlooking anonymous lanes have their moment of glory.

Hence, a restaurant in Rescaldina had prepared for the passage of the 15th stage of the Giro by replacing every bottle with a water bottle. The wine merchants in Lomazzo offered all their rosé wine at a special discounted price. The bookstore in Arosio had only books with cyclists on the cover in its windows. The delicatessen in Almenno San Salvatore had ordered a special pink caciocavallo cheese, while the bridge over the River Brembo was edged with balloons. A car dealer in Zogno had placed a ribbon-trimmed bicycle in the parking lot, while a local bar was plastered with pictures of Felice Gimondi. The Veloclub Selvino cyclists had placed a named sign on each of the 21 bends on the descent to Nembro:  Baronchelli, Pesenti, Gotti, Savoldelli, Gimondi and so on. All Bergamasque cyclists: cycling is like a religion in these parts.

To discover where this stage of the race would pass between Valdeng and Bergamo, all one had to do was follow the people lining the roads. Forget about looking for the arrows on poles set up the race organisers! All Giro devotees, patiently waiting for the race to reach Bergamo on a hot sunny afternoon. And they were rewarded, though the cyclists actually reached the finish line in Bergamo ahead of schedule: apparently all the racers wanted to finish quickly, fighting to keep or gain position and quickly catching up on any cyclist attempting to break away from the pack. All the Bergamasche slopes were taken at great speed.

Needless-to-say, none of the riders had time to look at the shop sign of a certain boutique in Rigosa. Surrounded by pink rosettes, it bore a quote from Audrey Hepburn, which is also a great way to describe this race:  “Elegance is the only beauty that never fades”.

Tom Dumoulin is an elegant racer, he rides his bike with the style of a champion. He is elegant is other ways too: when Nairo Quintana slipped while going downhill, he asked his teammates to slow down to give his rival a chance. Even the finish line was elegant: the skyline of Bergamo Alta with the panoramic viewpoint from the fortified walls of San Giovanni. “From up there,” wrote an anonymous traveller in the 1600s, “you can admire nearly every town in Lombardy, many rivers, a huge flood plain and distant mountains and hills, even the Apennines.” This year, the fans lining the roadsides could admire the skill and power of Bob Jungels, another promising young cyclist. When in attack, first uphill and then downhill, Jungels always looked totally at ease and in control. However, to win, he had to forget about the perfect style and rely on pure power. He pushed those pedals harder and used his elbows more... and won his first stage in the Giro d'Italia. Elegance, it is true, never fades, but a victory is equally memorable.