Home Race Italy at a glance

Italy at a glance

Review of the 12th stage of the Giro d’Italia 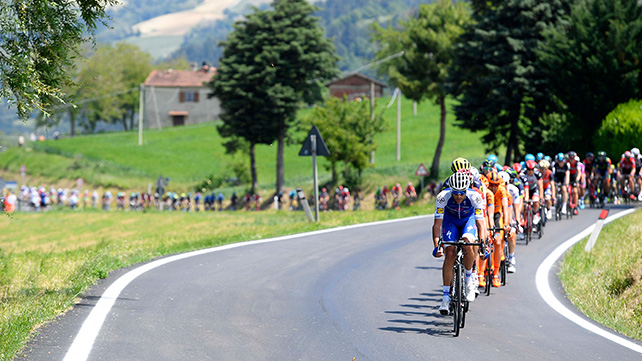 The 100th anniversary of Giro d’Italia has so many celebrity guests that recognizing its hosts and paying homage to them is almost impossible. Eleven stages, eleven foreign victories. Some people think that this is a clear demonstration of the difficulties encountered by the Italian cycling tradition; some others, instead, think of this as an unmistakable result of the growing interest in the Giro, which is drawing more and more world attention and champions. No matter what, everyone agrees on the unequivocal identity of the Giro, for it enjoys strong ties with the very places and atmospheres it runs through. Experts express this by saying that “the Giro d’Italia is more Italian than the Tour de France is French”, or “the Tour is strategy but the Giro is passion”. Riders share similar opinions as per the intimate, almost cosy environment of the Giro d’Italia. It is not unusual to hear the protagonists of the Corsa Rosa affirm that the Giro seems to belong to the riders and their spectators in the streets, and not yet to the rest of the world. However, if the Giro is one of the most Italian events, stage 12 of its 2017 edition is one of the most Italian stages.

As a matter of fact, the Forlì-Reggio Emilia stage is very much representative of the country - for a start, because it is the longest one of the Giro; 234 kilometres on a mid-May day look like a long and successful field trip. The race started in Forlì, Romagna, and soon headed westward, passing by Faenza, known for its ceramics. The first part of the route was unpredictable as it left the Via Emilia heading southward through the orchards of Valle del Lamone and the gypsum ridges where Brisighella is located. Climbs were gentle, leading first to the woods of Marradi - the capital of Tuscan Romagna - and then to the Colla di Casaglia Pass with its 913-metre ascent and fresh air. At that point, the route plunged into the Mugello area, rich in churches and convents, strongly reminding of Gastone Nencini, the Lion of Mugello. Barberino marked a sudden change of pace as a group of riders led by Mirco Maestri - from the hometown of Reggio Emilia - escaped from the front of peloton and turned into A1. The toll stations of the most important Italian motorway were wide open, no electronic toll system being activated, transforming the race into a panoramic one. Because cycling is a matter of speed but, above all, of detours. The motorway detour finished just before Bologna, allowing the riders to flank the Mausoleum of Guglielmo Marconi, close to which RadioCorsa celebrated its ancestor announcing that the lead was starting to shrink.

Bologna remained in the background as the Giro continued towards the factory outlets of Parmigiano Reggiano di Castelfranco and, finally, to Modena with its nobility and excellences. An upgrade by adjacent Ferrari would have raised the hope of Maestri and his bicycle, who were by then soloing the race. As he was approaching the outskirts of his hometown Reggio Emilia, he would have liked to be the first one to reach the Viale Isonzo stage finish. However, five teams were attacking him by means of their sprinters and he got caught with 7 kilometres to go.

The concise Italy stage including Ferrari, Marconi and the A1 motorway finished in the city of the Italian flag. Not far from the hall where the Cispadane Republic had officially adopted the red, white and green tricolour, Fernando Gaviria de La Ceja from Colombia launched a sprint and got ahead of Jakub Mareczko - of Polish origin - for the second time, thus preventing an Italian rider to win the Giro for the 12th time in a row. However, the light breeze of Emilia on a May evening encourages the Italians to be confident (as the Giro is still very long) and everyone else to look for a tavern, for the Giro has reached the Italian Food Valley.