Coppi and Bartali are historic figures in Italy. Now, a race in stages celebrates the contrasts between the pair. In sports, politics and character 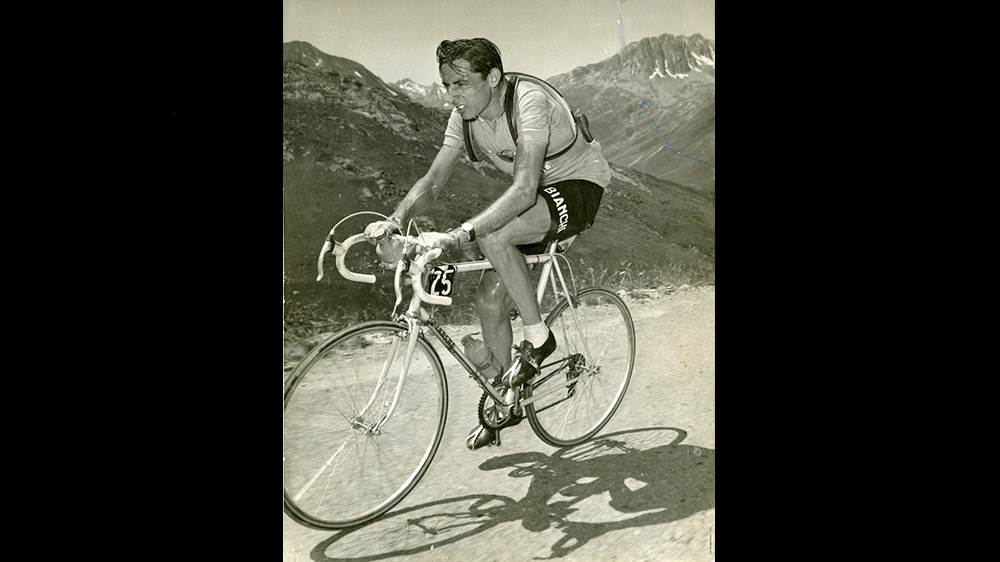 All the materials form part of the company's historical heritage which is now preserved in the Historical Archive of the Pirelli Foundation www.fondazionepirelli.org

Two champions, dividing a country in two, passing a water bottle between them. Fausto Coppi and Gino Bartali, the Galibier, the 1952 Tour de France and that water bottle, handed from one to the other; nobody really knows which of them was giving it to the other. Fausto Coppi and Gino Bartali represent the history of cycling in Italy. Outstanding champions whose rivalry continued over more than a decade of races, racing side by side in the Giro d'Italia eight times (five for Coppi and three for Bartali) and in the Tour de France four times (two each). It would be over-simplifying to call their relationship rivalry, and it is celebrated in the month of March every year with a stage race named after the two of them, Settimana Internazionale di Coppi e Bartali.

Gino Bartali, five years older, was an old-fashioned fellow imbued with Catholic values, whereas Fausto Coppi was decidedly ahead of his times in his lay spirit. While Bartali epitomised the perfect Christian Democrat, Coppi became the emblem of the Italian Communist Party, embarrassing moralists in his country with his relationship with Lady Bianca Giulia Occhini. But back before that, Fausto had fought in the army under Fascism, while Gino had refused to serve Mussolini and travelled thousands of kilometres back and forth between Assisi and Florence concealing false documents in the tubes of his bicycle that were to save the lives of 800 Jews.

The rivalry between Coppi and Bartali began in the 1940 Giro d'Italia, when the two were still on the same team, Legnano. Bartali was the captain, while Coppi – only 20 years old – was one of his supporting team members. But when Gino fell behind on one leg, Fausto – in response to his team’s suggestion – did not stop to wait for him. The two men’s roles were inverted, and when Coppi risked having to withdraw due to terrible cramps going over the Alps, Bartali encouraged him not to give up, throwing snow onto him to cool him off. Coppi went on to win the Giro d'Italia, while Bartali had to wait six years, until the end of the Second World War, for his next win.

In a country profoundly torn by conflict in which peace was still new and fragile, Bartali succeeded in another heroic enterprise, winning the 1948 Tour de France and –in popular opinion –helping prevent the outbreak of civil war following the attempt on Palmiro Togliatti’s life. In the meantime, Coppi left Legnano to race for Bianchi, putting the rivalry between the two men on another level, that of two different teams and two different bicycle manufacturers both aiming to be the best in the world. Fausto and Gino continued to give one another suspicious looks on the street, continued to live diametrically opposed lifestyles, and visibly aimed to outdo one another, sometimes preferring to prevent their rival from winning rather than aiming to win themselves. This is what happened at the 1948 World Championships in Valkenburg. Bartali, still furious at having been excluded the previous year, found the idea that his rival might win intolerable, while Coppi made sure not to let Gino gain an advantage. They both ended up withdrawn from the race and disqualified from the Federation for two months (later reduced to one).

Bartali was now 34, and his golden years were over. He began to tally less wins per season starting in 1949, while Coppi won both the Giro and the Tour in two years (1949-1952), and went on to win another Giro d’Italia in 1953, a World Championship in the same year and a Giro di Lombardia in 1954 for Bianchi, which had in the meantime become Bianchi-Pirelli. The two faced off again six years after Bartali’s withdrawal from racing, when Coppi, now forty, decided to finish up his career with San Pellegrino Sport, the team his friend and rival had just founded. Wearing their shirt, he went to Burkina Faso (known as Upper Volta at the time) to run the Ouagadogou criterium. “I’ll be back with a lion,” he said before setting off; “I’ll have it stuffed and give it to Bartali”. But instead he came back with malaria, though the doctors failed to recognise it, and he himself underestimated the symptoms, going to the football stadium in Genoa with a high fever to watch his team, Alessandria, play Genoa, observing the first steps of Gianni Rivera, who was to become the “Golden Boy” of Italian football. It turned out to be his last race, and his last football game. Candidò Cannavò reported on Bartali’s final salute, in tears in the crematorium: “It’s unbelievable, it’s unbelievable”. Because what looked to the world like an eternal rivalry had in actual fact been a great friendship. As Bartali said to his lost companion: “You and I were great friends. Other people saw us as cat and dog. You have gone off on your final run. Only now do I understand how much I really loved you. You took a part of me with you: twenty years of battles and more. I feel older now. Be at peace, Fausto, whom nobody ever called old.”