Red Hook Criterium, show of race and celebrations for the “fixie”, is back, with a rich and somewhat romantic past and a radiant present. 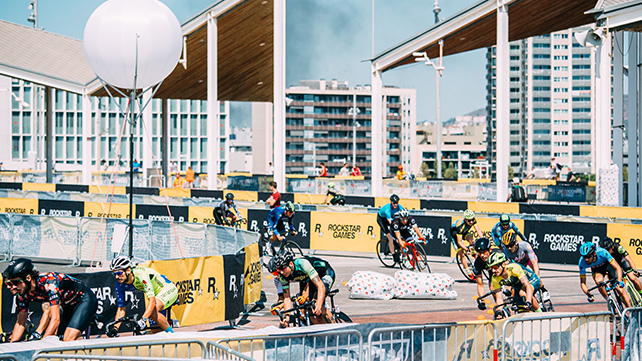 If you had, by chance, passed by the enormous parking lot of Milano-Bovisa campus on the evening of 15 October 2010, you would have been amazed at the very least. An absolutely unusual, unexpected, perhaps even indescribable show would have appeared before your eyes. A bicycle race, actually, but one hardly to be expected in this continent.

Luckily nobody passes by the parking lot of Milano-Bovisa campus, it is one of those typical no places the Lombard city is full of: concrete deserts with only one function – a short stop – for few hours a day, from Monday to Friday, otherwise they are non-existent. Not even a playground is there for your pets to do their business, no hope to transit through to get to the station, because from there you go nowhere. The perfect place, then, for an idea as simple as it is crazy like Red Hook Criterium.

I have no idea what Brooklyn Harbor, named Roode Hoek by the Dutch settlers because of an islet of red clay arising from New York Upper Bay, should have been like in those years, but I think it was not so different from that parking lot. Certainly its history was far longer and more glorious than a university campus built in a former industrial park. It is anywhere near there that the battle of Long Island was fought, famous defeat of George Washington who, only a month after the declaration of independence, witnessed the English taking control of the city; here the epic and struggles of New York harbor workers developed, made famous by Marlon Brando in “On the Waterfront”. Al Capone and H.P. Lovecraft, Norman Mailer and Peter Steele lived in Red Hook and here as well David Trimble decided to celebrate his birthday. With a bike ride, obviously.

Celebrating on a bicycle was something natural to one whose name was Trimble, son of that James Trimble who had designed the first carbon aerodynamic track frames. A revolutionary. Just like his son David, who since that birthday party has come up with a series of races by now known the world over, a global phenomenon bearing the name of the neighborhood: Red Hook. That first time, in 2008, was not that different from the Milanese night of two years later. A depressed area, rarely visited, scenario ideal to avoid disturbance. A course full of bends, lighted somehow with some car headlights, the blurred lights of lampposts, the even more tremulous little lights mounted on the bicycles.  Not enough for a race which had – and still has – one rule: only track bikes, fixed-gear and no brakes. They were the most popular bikes at that time on New York roads, in that community of bike messengers and aficionados who challenged one another every evening with alley cats and other very fast urban competitions. Trimble’s idea was that of bringing the spirit of these races on a circuit. An insight as simple as it is successful.

The first Red Hook was won by a woman, Kacey Manderfield, one-off but representative of a competition which has characterized male and female trials for some years, while maintaining for both a very high level. Twelve months later three times as many people were at Brooklyn harbor, and the first cameras as well. The first sponsors, media coverage, the debut abroad with the Milanese stage came with the third year. Since then the growth has been continuous: the amateur race has become a professional circuit imitated all over the world; it has passed from the lights of parked cars to headlights and electronic timings, the stages have grown to be four (as Barcelona and London has joined), the sponsors are now some of the leading brands of the cycling market, and other.

And the public has exploded, attracted by trials able to create the same mind-blowing atmosphere of the great competitions of track cycling, with as many spectators as more than 5000 every race and becoming the reference in any discussion on road fixed-gear cycling. Till even returning to its natural place: the track, with dedicated openings on the eve of each stage, conveying cyclists from all over the world to velodromes with different histories such as Horta (Barcelona), Herne Hill (London) and even the glorious Vigorelli of Milan. Even wider is the response of the riders, coming steadily from Countries of the five continents, with the groups of the United States and Italy to represent the biggest unit.

Next 14 October nobody will get to the parking lot of Milano-Bovisa campus by chance. And it is not because this no place of the Milanese outskirts has in the meanwhile changed, but because Red Hook has become an attractor able to transform it, in an almost constant way. So yes, also the big parking lot has changed, it is still a concrete desert but can swarm with speed and feast. It happens at Red Hook’s weekend and again all the year round, when the latent energy of the race comes back in solitary or group rides, either planned or spontaneous, not necessarily “fixed”.

It is the ironic case of “Ridot”, race for bicycles at 20” (in other words the old Grazielle, with any possible variation on the subject) held on the same circuit the week preceding the great event. Lights are again only lampposts, sponsors are non-existent, the cycling passion is exactly the same. Till last year the various facets of this passion were condensed by Luciano Berruti, familiar face of Eroica and founder of the Bicycle Museum of Cosseria. In fact he was the one to kick off the Milanese stage the last years, pedaling with a bicycle of the late XIX century, made by the magic typical of this perfect vehicle not too different from the rods of these days. Berruti will not be present at this year’s race, he gave his farewell to this life while pedaling on his roads last August. However the Red Hook’s history is beginning to be long and glorious enough to be able to leave the path of its noble fathers and sprint on its own, very fast, as projected by the bend of the velodrome towards the roads of the world.