P Zero Velo according to Rea

Face to face with the Superbike champion who trains on pedals, with the new P Zero Velo tyres 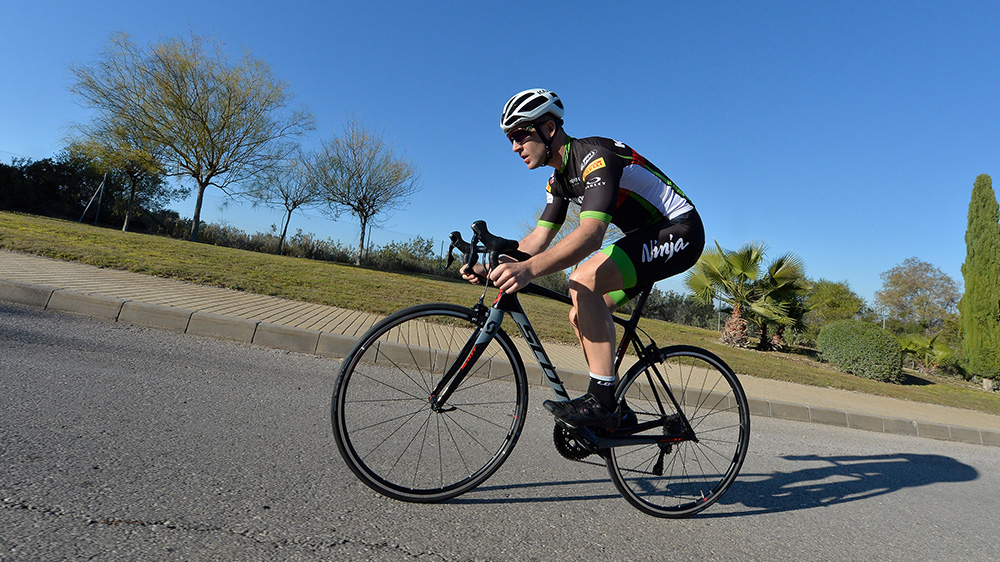 “This guy is a good rider, it’s evident that he does a lot of training and knows how to ride”. So, in April 2016, the ex-winner of the Giro d’Italia Damiano Cunego promoted Jonathan Rea, who is familiar with two wheels, but those drove by the engine of his Kawasaki. At 29 years old, Rea, already won the Superbike World Championship three times, dominating the last three seasons between 2015 and 2017. And as many other colleagues in motorsport he also loves to train and to compete on pedals. He started by chance, on the advice of doctors and physiotherapists, then he got to like it. Because, in the end – he explains – it’s a two-wheeler, and the relation between the ground and the pilot is mediated by the same tool: tires. For the tests in view of the new season in Jerez, Rea brought his bicycle with him and he mounted the Pirelli P Zero Velo on it. In this interview, he will talk about the new tires, his passion for pedals and his role as a tester for products that will be put on the market.

Why would a world Superbike champion train using a bicycle? What are the benefits?
Basically I train using a bicycle because it's a form of very low impact weight training. It was suggested to me that I train using a bicycle after I underwent a huge knee reconstruction. Since starting to ride a bike, I've seen a lot of countryside and I’ve fallen in love with cycling because you see so many different areas of the world and meet so many great people. For me, cycling is not only good for improving performance, but it's also a very social activity and so it's become my hobby and not just a form of training.

Some time ago Damiano Cunego said that you were a fast cyclist too. Some motorcyclists have switched to road cycling; vice-versa, some former road cyclists now ride motorbikes. Have you ever thought about participating in top-level road cycling races in the future?
To be honest, I don't think I’m genetically cut out to be a top level cyclist, but I've participated in some races before, specially KRT races, which I've enjoyed in the off season. Normally I start to pick up my cycling condition in January, and then, during the season, cycle just to keep fit. But, I mean, a friend like Simon Gerrans who was a top level motocrosser, and Michael Matthews too, another a top level motocross rider, both switched to cycling. I don't know of any cyclists who have switched to road races, but it's a cool sport, it's on two wheels... and you can see the guys from off-road, whether cyclists or motorcyclists, they're so good in their descents, showing a lot of confidence and also awareness. They are very clever, so there are benefits.

Tyres play a crucial role in riding a motorbike. How important are tyres when you use your bike?
Tyres are, perhaps, the most important factor when riding a bike, because there's a direct feeling between what you're doing on the bike and what's happening on the ground, so for me it's the most important component on the bike. To be fast on a motorcycle or to be fast on a bicycle requires confidence, and confidence is inspired by that feeling you get of contact with the ground, so tyres play a crucial role in this.

What are the characteristics you look for in a bicycle tyre and in a motorcycle tyre?
There is always a huge compromise between performance and durability when it comes to motorcycle tyres. We always want to be very fast, to sprint, at the end of the race, so it's always a headache for the technicians. But generally speaking, developments at Pirelli have been incredible in the last few years and we now have tyres that can be as fast in the last lap as in lap one. In the case of bicycle tyres, it depends on the level at which you race, but performance is surely the most important thing. What you do need, however, is a tyre that directly transmits feeling to the rider. In the case of amateur cyclists, the tyres must be reasonably durable, not prone to punctures, but for me, from the performance point of view, it's always nice to be fast.

Are you trying the Pirelli P Zero Velo tyres while in Jerez? What is your impression?
I haven't done a long run on that tyre, but my general opinion is that I get a lot of feedback through the tyre. In fact, I can find similar characteristics between a bicycle tyre and a road tyre, because, with Pirelli, you always get a lot of rider feedback and the feeling of safety is excellent. I’ve gained a very good first impression.

As a rider, you test new tyres before they are launched on the market. And when you train, you do the same with the P Zero Velo tyres. Your feedback matters in terms of product optimization. Do you feel a sense of responsibility?
Of course I feel responsible for the feedback I give to Pirelli engineers, because they take our feedback seriously. But, more than responsible, I feel very proud, as what I experience in racing and high performance is then transferred to production, to products that a customer can buy. in other words, we're competing at the highest level, but you can go out and buy the same tyre in the shops tomorrow. It's really nice that the link between racing and production is so close.