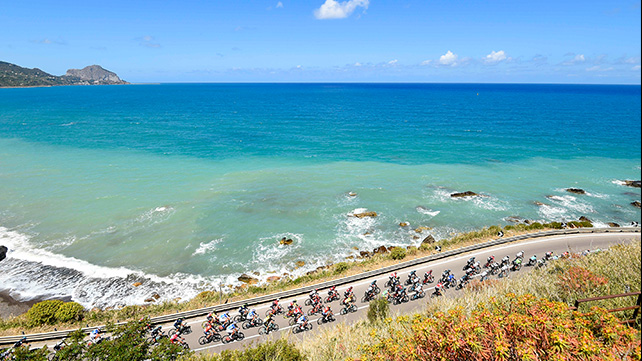 The group reaches Acquedolci, and it seems that days and life might go on only in this way, on the Tyrrhenian shore, among rare drops, cliffs, bays and ancient towers. Even the wild wind of the Sardinian weekend turns into a refreshing breeze. Everything appears to facilitate pedaling, even the toponymy: Acquedolci smells like granite and fresh, in distance there are the Eolie islands, you could just take a day trip on the sea, or head straight towards Messina and go on with that bizarre project of climbing the peninsula.

Instead, the Giro d’Italia is based on deviations; it is the chief exponent of the theory for which the shortest path between two points is a straight line, yet the most engaging one is all about parabolas and ellipses. In Acquedolci four sprinters anticipated the group and turned right, lured towards Sicily’s bowels by the organizers’ will and by the Mountain’s gravitational field.

Because, fine, the first thing you are supposed to do is to pass through Nebrodi mounts, but this afternoon final landing place is another one, and you do not have to look up in Wikipedia to figure it out; it is even unnecessary to stop in a café and ask some customers where are we? What do you know about these places? The Giro leads us to unknown areas, could you please tell me something more? Nothing of the sort. The fourth stage ends on the most active volcano in Europe. It’s “Iddu”, it’s Pindar and Empedocles, it’s fire and lava.

While Mt. Etna stands out in the distance, you can start feeling the difference through the Tyrrhenian blue rarefaction, and the bursting out of the huge broom yellow: it grows only here, can reach the height of ten meters, and it spreads out creating a bushy foliage of reeds. Also place names change: the first climb of the day is called Portella Femmina Morta (Portella Dead Girl), slow, with olive and orange trees. The second is the Salto del Cane (Dog Leap); the Etna side climbed during the 100° Giro d’Italia is called so, and it takes its name from the green craters along which aspens grow. You can run into them after passing several small towns with black basalt boulevards, fertile fields, and sidewalks colored by children: Bronte, Adrano, Biancavilla, Ragalna and eventually Nicolosi, the Etna’s gate, where the climb starts underneath an arch on which a blow up picture of Michele Scarponi is hanged.

It is Paolo Tiralongo from Avola, 39 years old, Scarponi’s good friend, the first one who attempted to catch up with Jan Polac, the sole survivor of the morning sprint. The age stops Tiralongo, the revenant wind everybody else. Rolland and Nibali tried, too, but the air stands opposite and it doesn’t allow that much advantage. Zakarin manages to gain a dozen seconds, Quintana fills the shoes of the favorite and limits himself to check. The ascent towards the Sapienza Hideaway is 17 kilometers and a half long, average incline of some 7%, yet in the very last 5 kilometers it reveals its true essence. The Etna reveals to belong to the desolation category: the one that the climbers’ eyes meet: they look for a handhold on the side of the road, and they find neither trees, nor shrubs, just blocks of black lava; and to the one of Polanc, the sprinter, who during the last kilometer is so tired that swings like an aspen. He zigzags. He invokes St. Agatha, who protects from fire and thunders, and his wish comes true: behind him nobody is setting the race on fire, the big battle, for now, has been put off. The Slovene wins the stage and rejoices as if he played goalie. Bob Jungels, the most stable among the ranking men, wears the pink jersey. 25 years old the first, 24 the second: the red twilight of the old Mount draws a youth veil over the gulf of Catania.