Home Race The best party of a lifetime

The best party of a lifetime 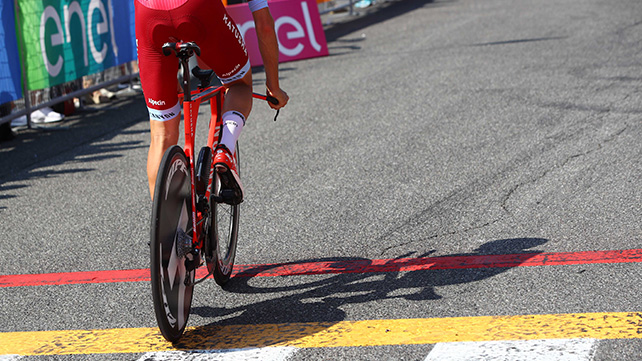 29.3 kilometres out of 3610 correspond to less than 1% of the entire Giro d’Italia but they were not less decisive. It was a stopwatch stage with the highest ranked cyclists starting last and vice versa. In addition, the race was an individual time trial: there were no teams, schemes, wait-and-see strategies or control. In the 29.3 km from Monza to Milan, the fastest man would win - causing the stopwatch to stop before anyone else. It was the day of speed, hence the Giro departed from the Monza circuit, where Kimi Raikkonen’s McLaren had reached 370.1 km/h in 2005, marking an all-time racing speed record. Bicycles are much slower than F1 cars, or better said, the bicycles confronting the Parabolic Curve, the Ascari Variant, and the two Lesmo Curves at the final stage of the Giro seemed to embody slowness and phlegm.

The finish looked inconsistent as well: Milan is Italy’s fastest city, always running and never turning around. However, it stopped on Sunday. It stopped to wait for the arrival of a road cycling race, not a Grand Prix. It stopped at the cancelled Duomo metro station stop, among the complains of a few tourists and the pride of some elderly people wearing a pink jersey for the occasion. Departing from the circuit of records to arrive in a hectic city riding the world’s slowest means of transport is one of thousand paradoxes in road cycling, at least apparently. As a matter of fact, bicycles entering the Milan area towards the finish line were not slow at all, they were real futuristic toys. Everything from saddles to helmets, handlebars, wheels, and water bottles is designed to cut through the air and win against time, thus favouring as much as possible time trialists’ obsession. “Time trial is a devastating weapon”, said Mario Fossati. “Time trial is an alien competition”, wrote Gian Luca Favetto. “A time trialist is like a lonely football right winger, running along the side of the road, near the touchline - almost never in the middle -, moving now and then to the left and back to the right, always following a mental route while dribbling ghosts and boredom.”

And Tom Dumoulin is the best in dribbling curves and boredom. He was the best time trialist in his group and, when he left the Monza circuit, he knew he could make it in his usual style - not too fast - thus jumping from fourth to first, winning the Giro d’Italia and making the last day of school memorable: the best party of a lifetime. Before his arrival, Piazza del Duomo had started to fill with sprinters and support riders, beginners and freebooters - everyone was happy, many were excited, some were sad: the Giro was about to finish, and life would be much easier but less exciting from now on.

Before his arrival, the square had welcomed fans, spectators, tourists and passers-by, not to mention all the colours, parasols, carnival confetti, and hats filling it. Half way through the race, Dumoulin had already caught up with Nairo Quintana. When he reached Porta Venezia, the Eastern gate of the city in the historical novel “The Betrothed”, Dumoulin was in a hurry just like Renzo, but instead of running away from Milan, the rider was running away from his fame. He made history as first Dutch winner of the Giro d'Italia; yet, he kept on asking the journalists interviewing him not to consider him a celebrity, in the hope that people back in Maastricht, his hometown, would not stop him on the street too often. He had started to study medicine but he never got a degree once he found out about his passion for cycling - life works in mysterious ways, he explains, refusing any degree title.

Tom Dumoulin won the Giro d’Italia. A group of Dutch female tourists sang “Tommy, dankjewel”: thank you for giving us one more reason to rejoice in such a hot May day. The Italians celebrated Nibali’s third position - the proud rider has always been a protagonist of the race. The Colombians tried to comfort Quintana - the third rider to lose the Giro in the final stage - staying in the square until late, after the three finalists had been gone for a while. They kept on honouring the Giro d’Italia, which is now over, announcing the celebrations of its next edition in less than one year.