Home Race The enduring charm of the Dolomites

The enduring charm of the Dolomites

The "Maratona dles Dolomites" is one of the most enchanting bicycle races for amateurs..

The second trip through La Villa, with a few houses squatting next to the mountain and a bunch of roads that climb upwards without being afraid of the height, seems to foreshadow a well-earned rest and party. Corvara in Badia, the historic end-point of the Dolomites Marathon, is located just over four kilometres by motorway from La Villa. It is in Corvara that the banner, loudspeakers, and San Vigilio bell tower are lit up by the summer afternoon sun - a very different place from the uncertain location of a few hours previously when the Marathon moved from the place of the crows to be greeted and blessed, and from where it started. But Corvara can wait a little; instead of taking the motorway, the route moves towards the high part of La Villa, where Emperor Fernando I authorised a manor to be built during the Renaissance. 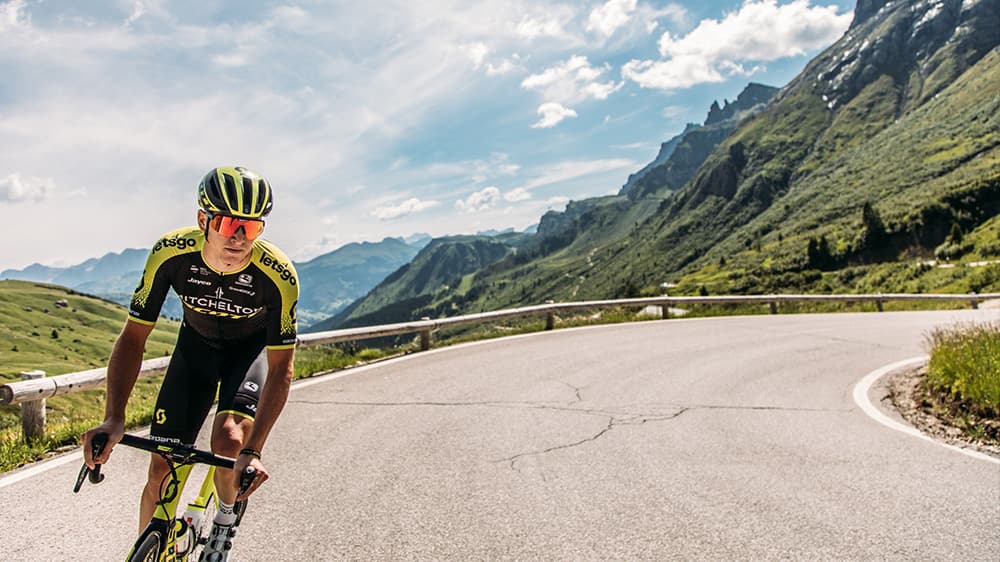 Known as Castel Colz, this gothic bloc atop a Dolomite spur overlooks the last stretch of the Marathon: the “Cat Wall” is only 360 metres long but it is as sharp and unexpected as a cat scratch. Though some say that the ascent bears this name because it looks like a claw on a map, the Wall is actually called this because the townspeople are still sometimes called Cats. With a 13% average gradient and a gradient of 18-19% at its most difficult points, the Cat Wall is more of a ramp than a street. According to Strava the best cyclists complete it in a minute or so; for less practiced cyclists, though, is like a final level boss in a video game, can be one long blowout. The Dolomite Marathon isn’t a light snack: it’s the most lavish banquet an amateur cyclist can get.

Competitors start in the Dolomites early in the morning; during the Triassic period, the Dolomites were actually a tropical sea similar to the coral reef in the Bahamas today. These pale mountains are like a magnet to cyclists, and are actually a collection of shells, seaweed and coral that a continental clash pushed to over 3000 metres above sea level, and winds and ice shaped them into pinnacles and peaks. Cyclists don’t have long to wonder whether their surroundings are stone or clouds, reality or a dream: the first climb at Campolongo starts straight away. Under 6 kilometres with a gradient of less than 6%, Campolongo is the ideal appetiser. It dispels any lingering false ideas, sets the pace for the race and is full of places where cyclists speed up and slow down.

After a quick descent cyclists arrive at Arabba before being faced with the unmistakable profile of Pordoi. The Pordoi path has a scenic view for the fill 2239 metres of its length. It has been the highest passage of the Giro 13 times, a Launchpad for Gino Bartali’s and Fausto Coppi’s businesses, celebrated at the head of the Pass with a commemorative monument. One of the wonders of the Dolomite Marathon is the chance that some 9000 participants are given every year to become part of the sporting legend inextricably associated with the geography of the mountains. When the Marathon passes the Pordoi it becomes a type of restitution ritual of the mountain for the adventurers who made it famous: the cyclists.

The next stage at the Sella pass marks the start of the heart of the Marathon. Sella is a keystone of altitude and competitiveness, the highest peak. It is in the middle of a group of peaks which bear its name and which used to be a huge, unique coral barrier. It climbs upwards for 5 and a half kilometres: at the hardest points it’s difficult to find the energy to look around, but the easier stretched give your eyes, if not your legs, a chance to relax and watch the climbers scaling the sides. The downhill stretch at Sella is a double prize: firstly the awareness that you can finish the race, and then, later, one of the Dolomite’s most breath-taking views opens up below you as you head down towards the valley.

After the Sella, there’s one last rough patch to get through before you’re completed the Campolongo-Pordoi-Sella-Gardena set. Saying their names one after the other is almost rhythmic. Finally we’ve reached Gardena: 6 kilometres at 4.3% gradient; in the middle, below the Mür Frëit, the marathon’s only stretch in the plain. Rather than abating at the slopes, the spirit is re-enthused here by the natural window onto the unforgettable Alta Badia. For those who have chosen the shorter route, the Dolomite Marathon finishes triumphantly with a swoop down the Gardena Pass to Corvanal for the others, the endless zig-zag of mountain roads invite them to head towards Falzarego, and, for the more daring, up to the Giau. The Giau is the most severe climb of them all: 10 kilometres with an average gradient over 9%, and a maximum of 15%. The top is dominated by Nuvolau and Averau, at above 2000 metres again; the fir trees give way to rhododendrons, silence, and mountain pine which resist snowstorms.

Once the Giau is over, cyclists are left happy at the Cat Wall, the one mentioned at the start of the article and which rounds off the Dolomite Marathon. The Marathon, which was first held in 1987, has grown since then, becoming a symbol of cycling just as its mountains have become a symbol of the wonders our planet offers: the Dolomites became a UNESCO world heritage site in 2009. From its starting point in La Villa to its end point in Corvara, there are only 4 kilometres of motorway. The Dolomite Marathon, which can be 55, 106 or 138 kilometres long, is a wonder, stretching the beauty of the mountains out immeasurably.