Interview with Paolo Savoldelli, one of the most famous downhill-racer ever explains his own technique secrets.

The 28th of May 2005, the second to last Giro d’Italia’s stage, Paolo Savoldelli was about to have the pink jersey, which he had been wearing for a week, slipped away. On the first hills of Colle delle Finestre Gilberto Simoni, José Rujano and Danilo di Luca, respectively second, third and fourth in the general rank, started sprinting. Savoldelli was clearly struggling: on top of the hill he had a 2 minutes and 20 seconds delay from the trio, Simoni was the new hypothetical rank leader. 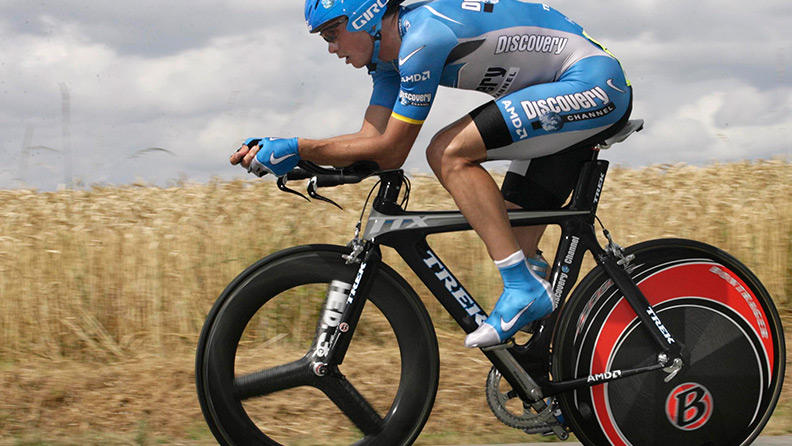 «I understood that I was losing the pink jersey, but I managed not to give up», Savoldelli recently said in Il Centogiro – 99 storie (più una) dal Giro d’Italia  (Ediciclo Publisher). As a matter of fact, during the Colle delle Finestre’s slope, Savoldelli was able to hold out against his downhill-racer soul and to develop a flawless tactical piece of reasoning: if on the slope he hadn’t outdistanced the racers left with him, these latter would have been useful during the final section of the stage, which was uphill. «We didn’t talk that much, but what we told each other was enough».

It went as planned by Savoldelli. Going up to Sestriere, the chasers made up for the delay they had from the trio, and the champion from Bergamo defended the pink jersey. He won his second Giro d’Italia thanks to a perfect tactical choice, which was made in a very tough time. He put aside his technical skills and privileged rationality. The downhill-racer Savoldelli obtained one of his most important victories in his career without taking advantage of his favorite battle ground. «It was one of the most intense day of my career. What matters when facing descents is to understand the importance of your mindset: you have to give it all only when is needed, otherwise it turns into a useless risk».

And, instead, as far as technique is concerned, is it possible to train it or is just something you are born with?
For sure is a gift you have since your childhood. They who don’t have it, even if they work out, can just become less mediocre; a gifted one can become extremely good. However, a scarce one will never become very good. To give you a clear example, going down on your bike is like parking your car: there are people who need 3 maneuvers to do it well, and who, instead, can park perfectly on the first try»

What can we do to improve our technique?
«About the driving technique: learn to always use the whole street at disposal. About the mindset: train to stay focused and to take decisions in a split second».

When did you realize to be particularly gifted for this specialty?
«I was a boy. At that time there was no PlayStation, and the hobby I had together with my friends was the BMX, we used to go to the paths around Bergamo’s hills. I always had to wait for everybody down the descents. There was one time in particular in which I overtook them so fast that once they got to the valley they told me: “You must be crazy”. But it was something natural for me».

The 1999 Giro’s Fauniera descent marked your career and bequeathed you a nickname: the Hawk. After around 20 years, what do you remember about the time when you decided to attack?
I remember everything very well about that stage. The day before was of rest, and I used it to go and see the descent, and I figured out that it really suited my features: there were many hairpin turns and especially many semi-turns from which it was possible to go out very fast. I had a team mate located 500 meters far from the peak, so as he could pass me the helmet, which wasn’t mandatory at that time. I wore it and I dived down so hard that for three times I felt like both the wheels were slipping away from me, which is something that happens when you enter turns too fast. I reached Pantani, who on the peak was 2 minutes ahead of me, and I braced myself for the three hairpin turns which I remembered most in the whole slope. I had to take the lead and go down all the way, and, if I wanted to take a further advantage, that was the time. I did great, and on the following straight I thought: “Nobody could have caught up with my wheels” I won the fear of turning back, so I did it and actually there wasn’t anyone behind me».

How would you describe, in the easiest way possible, your downhill technique?
«In a single adjective, I was balanced. I moved the bottom backwards, and I was hunching on my bike, with shoulders and body close to the handlebars, but not too forward to throw the weight off balance. My secret was to draw lines without fixing them: if during a turn I was 3 centimeters far from the roadside, that happened not because I made a mistake, but rather because I chose to do that turn exactly like that».

Has the way of facing descents changed compared to the time you raced?
«What has changed today is mostly the fact that it is difficult to find high downhill skills among those competing for the general rank of a great tour».

Who, among the nowadays racers, do you think he can get closer to your ideal style and effectiveness downhill?
«There are still many different team-specialists, for example I am thinking of Peter Sagan; the problem is that you hardly ever see them ahead during important mountain stages».

Therefore, may we say that there isn’t a new Paolo Savoldelli?
«Well, let’s say that I don’t see anyone doing what I used to, that’s a fact».