Home Race The legend of Pantani

The legend of Pantani

Marco Pantani was romantic and solitary, feeding himself with sufferings and victories. Like every year, the Memorial Marco Pantani will be held in his honour 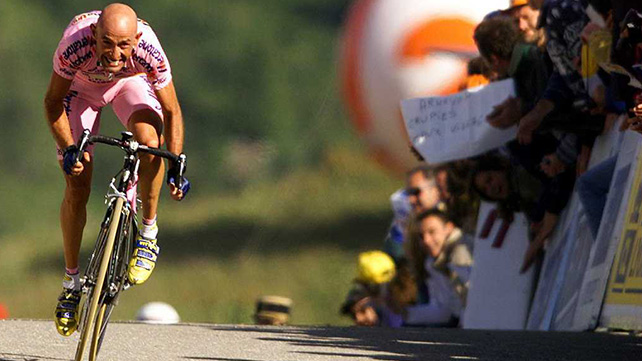 That day people had to struggle, wait, even stretch to buy a piadina. They had to stand in long lines for a t-shirt, too, but they did it smiling.  To find a place near the stage, one should have arrived in the afternoon hoping that the Marinella skyscraper could shade and cool torrid piazza Andrea Costa. Those who had arrived late, stayed at the bottom, chatting and waiting for an imaginary show. On the stage there was a painting by Dario Fo and some unimportant guests. Nobody was very interested in the presence of Prime Minister Romano Prodi or that of Felice Gimondi: they were support riders, not even from the front rows. They were waiting for only one person while a questionable band was playing the hits of the summer - especially “Tubthumping”, an unexpected hit in the Chumbawamba’s long career.

Actually, anything was unexpected on the evening of 13 August 1998 in Cesenatico. That very party was unexpected a month earlier, when the Tour had just started amidst the scandals of the affaire Festina and its Grand Départ in Dublin. A little more than 5 kilometres were enough for Marco Pantani to finish in 181st position out of 189. A few days later, everything had changed, which for the crowd gathered in Cesenatico was not unexpected. There were 50 to 60 thousand people fitting 1 kilometre with pink and yellow colours waiting for Marco Pantani, with his bleached goatee and eyebrows. “This is a story not a fairy-tale”, he said. Instead, that day one circle closed.

The life of Pantani is made of two circles. Looking at them from a distance, they resemble the wheels of a bicycle. Looking in depth into them, they resemble the infinity symbol. His two circles, however, are incomplete. The first one starts in his childhood in Cesenatico, closing on that very 13 August 1998. The second one starts there and closes in Rimini - the wrong place.

The first circle
Marco Pantani was born on 13 January 1970 in Cesena. His mother Tonina is from Cesenatico and used to sell piadine at a specialised kiosk. His father Ferdinando, otherwise known as Paolo, is from the inland town of Sarsina - the same place where Roman playwright Plautus was born. His grandfather was a farmer and a cobbler; however, as it was not enough to support his family, he had moved near the sea in search of fortune. But Marco’s DNA was probably impregnated with his rural origin, made of hills and plays. As a matter of fact, he had always been very theatrical in his rebellions, mistakes and affections. His passion for cycling began a little later but it was love at first sight. As soon as he started riding, he rediscovered his rural origin, his hills. From his childhood friends to the youth teams of the Romagna region and the amateur cyclists against whom he won the Baby Giro, nobody was able to keep up with him uphill.  In 1993, when he entered the professional category, he had no equal rivals either. So, a year later, he had already become the strongest, bravest and shabbiest climber of all. He burst onto the scene of road cycling winning stages and getting on the podium of both the Giro d’Italia and Tour de France. “I bet everything on the bicycle. Now I think that my future is in my hands”, he said when he was young - he never regretted quitting his studies for the bicycle. His career had only lacked some bad luck, which started dogging him with a series of accidents that caused him to stop racing for three years. However, such a long period out of the spotlight helped him to consolidate his myth, which was celebrated as soon as he was able to win again. His rebirth as was in 1997, on the Alpe d’Huez, where he shouted with joy and burst into tears. “I saw the tears of a 50-year-old man who weighs 150 kg. It is only then that I realized I did well”, he said while his fans were singing the popular song “Romagna mia”. He was on top of the world but looked as if he were always on the beach of Cesenatico. Describing Pantani at the top of his career, Gianni Mura wrote: “he is deeply rooted in the land of cycling, the land of men, farmers, nomads and poets, perhaps even the land of pirates. In some outskirts bars there is always an accordion or a guitar on the last table at the bottom of it. Then somebody comes in and starts playing. That’s exactly what Pantani does when facing a true climb”. This was the music accompanying the arrival of Pantani at his 1998 Giro d’Italia, Tour de France and square in Cesenatico.

The second circle
The crowd gathered in Cesenatico marked the start of Pantani’s second phase. It was inevitable. Road cycling hadn’t seen a champion like Pantani in a long time. His temperament was exuberant but never intrusive. He was everyone’s champion. When he raced, the streets teemed with people, and when he won, the winner was road cycling itself.  However, he didn’t mean to represent it because he had felt the risk of such an approach, and he did so to the point that he stopped smiling. “No one has ever taken me seriously. Why is everyone doing it now? Just because I bike fast?”, he said bitterly. When Pantani won, instead of finding his 150-Kg friend crying on the top of the Alpe d’Huez, he saw a wall Necessarily, he started looking at his own suffering, the same one he had been able to keep out thanks to his passion for cycling. That was him. After his first few victories, he was asked about the things he used to take with while pedalling. He would answer: “My suffering. Climbs are where you suffer the most, and in order to sprint against my fastest rivals, I have to increase my suffering”.

This is the same suffering that he was faced with when he remained alone. Since 1998, long before the events at Madonna di Campiglio, Marco Pantani had discovered a new life companion - what he defined very well as the torrid sadness. His removal from the Giro d’Italia and the police investigations against him accelerated this process. The destination of that new race would be the apartment building in Rimini, on Valentine’s night, where he wrote a painful testament on his passport.

The infinity
The second circle of Marco Pantani never closed. His journey was completed by those many who had personally or virtually been touched by him. 19 years after the kermesse and 13 years after his last night, his heritage has finally been set free and guarded over by his fans. Nowadays there are books, videos and theatre shows about Pantani; his name appears in songs and poems. There is also a road bicycle race in his honour, the Memorial Marco Pantani, which was set up a few months after his death. This year’s edition will be on 16 September. Both departure and arrival will be in Cesenatico, and the track will pass by his monument, his climbs and his house. Pantani’s transition in the world of road cycling was quick but his effects are long-lasting. The power of dream - a luxury that we can all enjoy - will last forever. As Mura wrote, “The greatness of Pantani was his apparent inadequacy. At every hairpin turn, he seemed to be transfigured. He became immense, as if he fed himself with solitude, as if the worst fatigue thrilled him. This last, extreme representative of a romantic, antediluvian, and poetic cycling era seems to pine away along the longest way approaching the sky”. That is the sky where the second circle - finally a complete one - of Marco Pantani closed drawing the infinity symbol.