Home Road On
your bike

What’s the rarest, most exclusive Aston Martin you can buy? Here’s a clue: it’s got two wheels 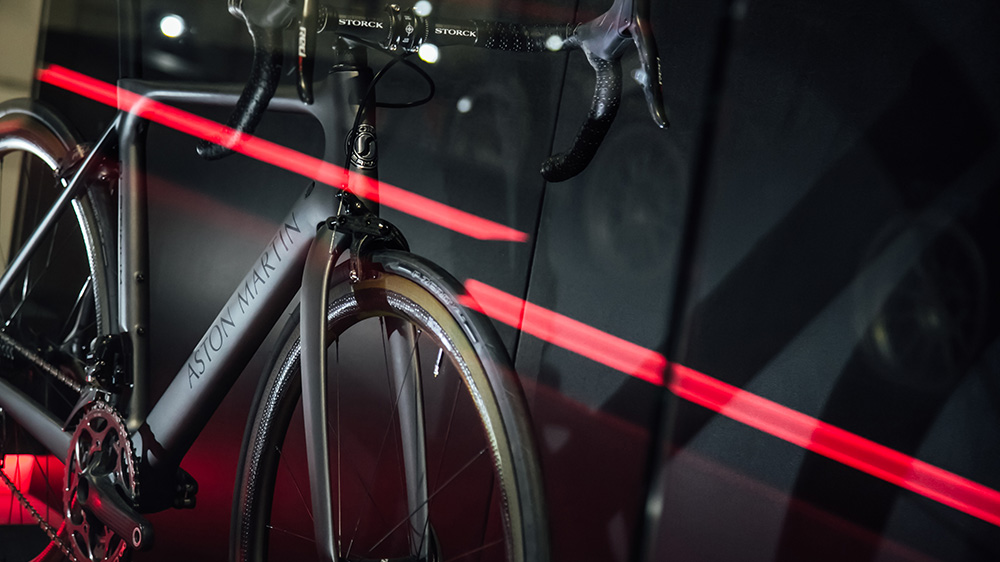 A road bike, but not as you know it
One of the last things you probably expect to find at a car show is a bike. But a genuine star of the Pirelli stand at the recent Autosport International Show in Birmingham, England, featured two wheels rather than four.
Still, there was a strong automotive connection, as you would expect, and it also goes very fast – as you would equally expect. The bike in question was the Aston Martin’s Fascenario.3, which is actually manufactured by renowned bike maker Storck.
The whole thing weighs just 5.9 kilograms, which means that picking it up discombobulates the senses. It’s very easy to sustain some sort of reverse muscle strain when handling it, as you expect it to be far heavier than it actually is. In other words, you have to lift it gingerly: an unconsidered move is likely to send it shooting skywards. And given that it costs around £15,000 to buy, using it as a frisbee would be something of a shame.
The other thing that makes it stand out is its paint. It features resplendent Argentum Nero paintwork, intended as a tribute to Aston Martin’s racing green. Depending on the angle from which you view it, the colour looks like either green, grey or silver – with a hint of black as well. As you can probably gather, this is no ordinary bike.

A postage stamp between rider and the road
Connecting the bike to the road are Pirelli P Zero Velo tyres: and they do a vital job. The average car tyre presents a contact patch to the road surface that is roughly equivalent to an A4 sheet of paper. In the case of a racing bike, it’s more like the size of a postage stamp. So, this means that finding grip is more important than ever, especially at the sort of velocities this ultra-light Aston Martin will travel at. Extreme performance isn't just for cars.
Everything on the bike is designed with speed and aerodynamics in mind: from the wireless gearshift (which cuts down on cables and weight) to the design of the front forks, which are deliberately set quite a long way back from the wheel in order to optimise airflow and eliminate undesired vortices.
The entire structure uses Nano carbon technology, which combines strength with lightness. Bike creator Markus Storck says that it’s “probably the best bicycle ever built with an automotive name on it.”
But you’ll have to be quick to get your hands on one, as only 107 are being built.

107 reasons to be cheerful
Despite its high levels of technology and similarities with an Aston Martin road car (for example, you grab a right-hand paddle to change up a gear, and a left-hand paddle to change down) a number of the bikes will probably end up as objects of art in a living room rather than battle-scarred warriors of the road. And why not? Watching the paint change colour is in itself an intrinsically soothing activity, and much better than most things on television these days.
You might also be wondering why there are only 107 of the bikes being built. Originally, Markus Storck – a keen fan and owner of several Aston Martins – collaborated with the British manufacturer on the Vanquish ‘one of seven’ project: a septet of cars created by Aston Martin’s bespoke division, Q by Aston Martin to showcase the use of carbon fibre. So, 107 became the magic number: although it’s probably going to be a rarer sight on the road than even the most exclusive Bond car (despite being considerably cheaper).
As an example of the bike maker’s art though, nothing else comes close. Over the years, an astonishing array of performance machines have worn Pirelli tyres. In its own way, this might just be the most extreme and obsessively-detailed of the lot.